Home » Quran » Islam and sincerity of Muslims to the Qur’an

Islam and sincerity of Muslims to the Qur’an 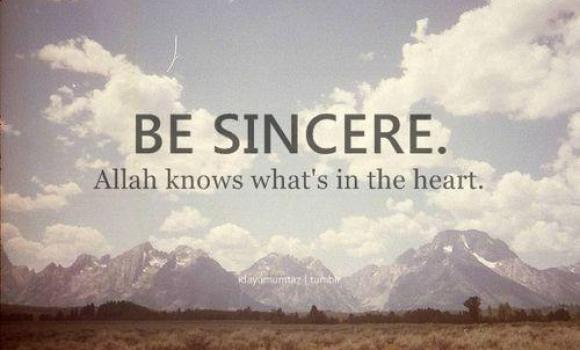 Islam is established to create a divine culture capable of enhancing the spiritual and material development of the individual and society. Islamic culture is based on monotheism imbued with ingredients for social, political, ethical, legal, economic developments and protection of lives and properties.

The Qur’an condemns anarchy, lawlessness and disorder. It enhances social values by asking Muslims to eschew the evil and enjoin the good (Q3:104), to uphold justice; and eschew violence and to render back trusts (Q4:58). None of these lofty goals can be achieved without sincerity!

Lack of proper home training: Woman is regarded as the first point of contact between the infant, and the concept or ideas he or she holds for the Almighty Allah, the community where-in he or she lives and his or her global perspective. Being the first teacher in the life of a child, Islam encourages the mother to seek positive knowledge and impact them on their wards.

The Prophet said: Seeking knowledge is mandatory on Muslim male and female.
-    Seek knowledge from the cradle to the grave.
-   Teach a woman and you have taught a nation.

The aforementioned ahadith emphasize the importance of equipping women with knowledge. The Islamic objective here is the training of women who will be capable of upbringing youths capable of making positive contributions to their respective community and to global development. Unfortunately, the situation is the opposite because lack of sincerity in marriage has turned so many married women to single mothers who often bring up children with transfer aggression resulting from pains of marital separation.

Insincerity in the political Sector: Most problems that are confronting this generation emanate from absence of fair hearing as well as refusal to uphold justice, whereas the Qur’an has already stated clearly: … Let not the hatred of other people to you swerve you to wrong and make you unjust. Be just, it is closer to piety. (Q5:8).

Even if a person is a tyrant, that should not deter a good Muslim from correcting a wrong-doer, although it might be costly. The Prophet Muhammad (S.A.W) said: The best struggle (jihad) is a word of truth before a tyrant ruler. (Imam An-Nasa’i)

Another problem confronting human society is refusal to support workers on the part of truth. Allah calls the believers to compete in doing good thus: ….help ye one another in righteousness and piety, but help ye not one another in sin and rancor….(Q5 :2)

….Let there arise out of you  a band of people inviting to all that is good, enjoining what is right, and forbidding what is wrong……(Q3: 104)

The instruction in the quoted verses can be divided into two sections namely: dos and don’ts. Allah promised to work in accord with mankind so long as they cooperate in doing good. He (SWT) also warns them against joining hands to commit or spread evils. Obeying the divine instruction gives man peace, happiness and tranquility in both worlds while embarking on evil deeds and joining the multitude on wrong causes can only lead man to doom and perdition.

In order to overcome this kind of situation, the Prophet Muhammad (S.A.W) instructed. Let not any one of you be a blind follower who says, “If people do good, I will be good, and if they do wrong, I will do the same”. But you should stick to righteousness ….(At-Tirmidhi transmitted it).

Insincerity in religious Sector: Scholars of religions are not also free from the blame. Some if not most of them only preach along areas that favours them, while tactfully avoiding preaching with verses that seem to condemn their evil deeds.

Repercussions of lack of sincerity
Social insecurity that abounds everywhere in the world today is not imported from heaven. It is purely manufactured by man. It is clearly stated in the Qur’an:   Mischief has appeared on land and sea because of the evil deeds that the hands of men have earned, that Allah may give them a taste of some of their deeds: in order that they may turn back (from evil). (Q30 [Ar-Rum]:41)
Importance of sincerity in the life of a muslim

Sincerity is the prime condition for the validity of deeds in the sight of Allah. Allah is pure and will never accept any deed except if it is good and pure.

Just as show off, pomposity and boasting renders good work to naught so also sincerity and undiluted devotion magnifies small deed so much that it will attract enormous rewards.

A young man or woman who sincerely prays to Allah to bless him or her so as to become married will not only receive divine help to accomplish the objective, he or she will continue to receive rewards for going into legitimate sexual intercourse. Whoever wants to have a child who will worship Allah will have the reward even he or she does not have a single child.

Sincerity is an effective means of curbing distress because it reassures hope when it seem all hopes were lost. A good example is the case of three young men who were on a journey and ran into a cave for safety when it was about to rain and there was heavy blow of wind. The first sincerely obeyed his parents for the sake of Allah. The second sincerely avoided fornication with a lady at a point of no return for the sake of Allah.

Sincerity is required if we truly want to form lasting relationships, build happy homes, form peaceful society and live in a world where everyone can legitimately achieve good aims and laudable objectives.

Concluding remarks
Islam, being a complete way of life, has placed enormous priorities on sincerity to Allah and to the generality of mankind. Our objective and honest recommendations therefore, Muslims should allow the various ethics of Islam discussed in this presentation to regulate their actions and reactions and to inform their approaches to mundane and spiritual matters.

We need to address various challenges facing the world with righteousness and fear of Allah.