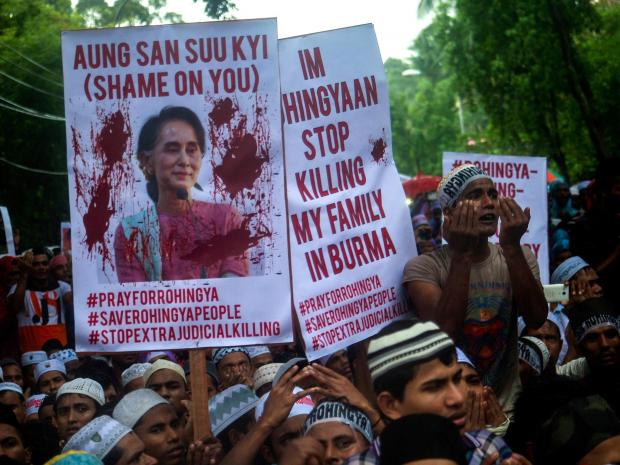 Brussels: Aung San Suu Kyi on Tuesday rejected a decision by the UN's rights council to investigate allegations of crimes by Myanmar's security forces against minority Rohingya Muslims.
The UN body agreed in March to dispatch a fact-finding mission to the Southeast Asian country over claims of murder, rape and torture in Rakhine state.

"We do not agree with it," Suu Kyi, Myanmar's de facto leader, told a press conference with EU diplomatic chief Federica Mogherini during a visit to Brussels, when asked about the probe.
"We have disassociated ourselves from the resolution because we do not think that the resolution is in keeping with what is actually happening on the ground."

Nobel laureate Suu Kyi said that the country would be "happy to accept" recommendations that were "in keeping with the real needs of the region.

"But those recommendations which will divide further the two communities in Rakhine we will not accept, because it will not help to resolve the problems that are arising all the time."
Suu Kyi has seen her international star as a rights defender wane over failing to speak out about the treatment of the Rohingya or to condemn the crackdown.

Rights groups say hundreds of the stateless group were killed in a months-long army crackdown following deadly attacks on Myanmar border police posts. Almost 75,000 Rohingya have fled to neighbouring Bangladesh where they have related grisly accounts of army abuse. But Suu Kyi rejected suggestions that she or Myanmar authorities were deliberately overlooking atrocities.

"I am not sure quite what you mean by saying that we have not been concerned at all with regards to the allegations of atrocities that have taken place in the Rakhine," she said. "We have been investigating them and have been taking action." Mogherini called on Myanmar to support the UN inquiry. "The establishment of the fact-finding mission is one of the very few issues of disagreement between us," she said alongside Suu Kyi. "This can contribute in establishing the facts for the past, provided that we fully agree on the need to work together on the way forward," she said.

UN investigators say the crackdown likely amounts to crimes against humanity and ethnic cleansing.
But Suu Kyi told the BBC earlier this month: "I don't think there is ethnic cleansing going on."

Question to you about Nobel laureate Suu Kyi