Home » Lecture » News » Ramadan » Ramadhan and the universality of fasting

Ramadhan and the universality of fasting 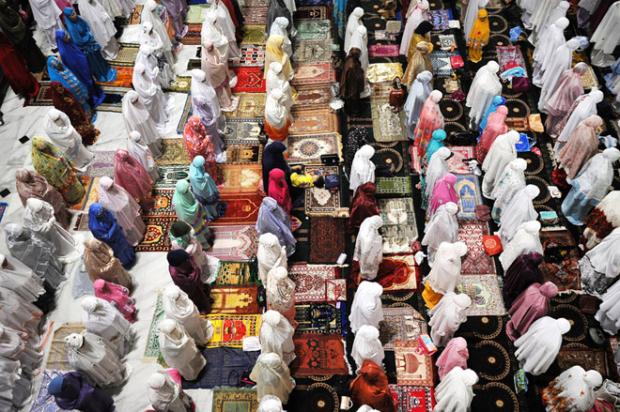 As the merciful month of Ramadhan descends upon us yet again during the last week of May, we must reflect on its virtues and remind ourselves of the conditions of observance of the fast, its restrictions and constraints and prepare ourselves to benefit from it.

With the advent of the new moon ushering in the lunar month of Ramadan, Muslims all over the world will commence the ritual of fasting. In the context of the Islamic religion, fasting is not just a ritual. It is a religious duty enjoined on those entering the fold of Islam. As much as observing the compulsory prayers, giving the compulsory Zakath tax and undertaking the journey to the Holy City of Makkah for performing Haj, fasting is required to be observed with equal reverence because it is an act of worship. The Arabic word for this act of worship is SIYAAM and the person who undertakes the fast is called a SA’AYIM. In the context of the religious fast these two words do not signify mere abstention from food and drink, but also complete abstention from evil thoughts and actions and harmful acts towards others (including animals and plants).

The ever Merciful Allah says in His Holy Book:

Allah in His absolute Mercy does not wish hardships on His creations. Therefore Allah iterates in the foregoing verse of the Quran that this fasting is not peculiar to Muslims only. It had been ordained on people who followed other Prophets prior to Allah sending the last and seal of the Prophets, Prophet Muhammad (On whom be peace).

The Jews are required to fast for sixty days during Passover and a strict observance of the fast on the day of atonement (Jeremiah 36:6), also see the Fast (Acts 27:9)

Moses fasted during the 40 days and 40 nights he was on Mount Sinai receiving the law from God (Exodus 34:28). King Jehoshaphat called for a fast in all Israel when they were about to be attacked by the Moabites and Ammonites (2 Chronicles 20:3). In response to Jonah’s preaching, the men of Nineveh fasted and put on sackcloth (Jonah 3:5). Prayer and fasting was often done in times of distress or trouble. David fasted when he learned that Saul and Jonathan had been killed (2 Samuel 1:12). Nehemiah had a time of prayer and fasting upon learning that Jerusalem was still in ruins (Nehemiah 1:4). Darius, the king of Persia, fasted all night after he was forced to put Daniel in the den of lions (Daniel 6:18).

Christians are required to fast for 40 days during the period of lent and the New Testament records fasting in different situations. Anna "worshipped night and day, fasting and praying" at the Temple (Luke 2:37). John the Baptist taught his disciples to fast (Mark 2:18). Jesus fasted for 40 days and 40 nights before His temptation by Satan (Matthew 4:2). The church of Antioch fasted (Acts 13:2) and sent Paul and Barnabas off on their first missionary journey (Acts 13:3). Paul and Barnabas spent time in prayer and fasting for the appointment of elders in the churches (Acts 14:23). Thus the Quran explains that fasting is not a new act imposed upon Muslims.

Buddhists are known to fast on Poya days when they observe Sil. An article on the Washington Post's "On Faith" website says that "In Buddhism, fasting is central to the journey to Enlightenment".

Fasting is a very important aspect of Hinduism. Hindus observe fast in the name of God every once, twice, or more times a week.

Fasting is very common among Jains and as a part of Jain festivals. Most Jains fast at special times, during festivals, and on holy days. Paryushan is the most prominent festival, lasting eight days in Svetambara Jain tradition and ten days in Digambar Jain tradition during the monsoon. The monsoon is a time of fasting. However, a Jain may fast at any time, especially if he or she feels some error has been committed. Variations in fasts encourage Jains to do whatever they can to maintain whatever self-control is possible for the individual. Bahá'u'lláh designated a nineteen-day period each year when adult Bahá'ís fast from sunrise to sunset each day.

Sikhism is the only philosophy that does not promote fasting except for medical reasons.

People fast for various reasons but the religious fast enjoined in all religions is summarised in the Qur’anic verse as "that you may become Al-Muttaqun (the pious)…" There is no other reason that can be attributed to a religious fast as such fasts are observed particularly during periods of religious significance. Generally all religions are united in this respect.

Others who do not observe religious practices also fast for reasons other than ‘to become righteous’. Dr. Michael Mosely conducted an experiment on himself, fasting two days a week intermittently and declared that such fasting promotes good health and weight loss and longevity. (see Michael Mosely-"The Fast Diet: The Secret of Intermittent Fasting - Lose Weight, Stay Healthy, Live Longer").

As explained in the foregoing paragraphs each religion has different number of days of fasting and different manners of fasting.

For Muslims Allah continues in the same verse quoted above as follows:

"…(Fasting) for a fixed number of days, but if any of you are ill or on a journey, the same number (should be made up) from other days. And as for those who can fast with difficulty, (i.e. an old man, etc.), they have (a choice either to fast or) to feed a poor person (for every day). But whoever does good of his own accord, it is better for him. And that you fast, it is better for you if only you know." (2:183-84)

While there are no difficulties about the number of days for the Fast and the times between which abstention from food and some other permitted acts on other times are forbidden, there are controversies, confusion and contradiction with respect to commencement and conclusion of the Fast.

The month prescribed for the compulsory Fasting is the ninth month in the Islamic Lunar Calendar called in Arabic Ramadan (Quran 2:185). However, unlike the days in the Julian Calendar, the days in a Lunar month can differ from year to year, but the difference is never more than one day – that is the lunar month in either 29 days or 30 days depending on the cycle of the moon (Quran 55:5, 10:5, 36:39-40). According to the Islamic Calendar months are to be counted by new moons (Quran 2:189, 10:5).

Allah in His absolute wisdom clarifies in the Quran that when someone sights the crescent of the month (of Ramadan) must commence the fast as follows:

"The month of Ramadan in which was revealed the Quran, a guidance for mankind and clear proofs for the guidance and the criterion (between right and wrong). So whoever of you sights (the crescent on the first night of) the month (of Ramadan), he must fast that month, and whoever is ill or on a journey, the same number (of days which one did not fast must be made up) from other days. (Emphasis mine).

Thus sighting of the moon for commencement of the fast is not just from Ahadith but contained in the Quran as cited herein.

"Allah intends for you ease, and He does not want to make things difficult for you. (He wants that you) must complete the same number (of days), and that you must magnify Allah for having guided you so that you may be grateful to Him" (2: 185)

In authentic Ahadith in Imam Malik’s Muwatta and the two Sahihs Bukhari and Muslim, it has been reported on the authorities of Ibn Umar (RA) and Ibn Abbas (RA). I cite these Ahadith with the full chain of narration in order to avert any controversy as to authenticity:

In explanations of the transliterated Arabic words (fa aqaduru la hu) in the above Hadith, Islamic Scholars derive an interpretation from the Quran itself that it can mean a set limit (Quran 77:22-23, 6:96) or evaluate or estimate or measure (Quran 6:91). Applying either meaning to the stated words, Ulemas interpret this as if the crescent moon cannot be seen by being obscured by cloud, dust etc. then calculate or estimate the length of the month of Ramadan or restrict the month to twenty nine days.

4. Hajjaj bin al-Sha‘ir related to me: Hasan al-Ashyab related to us: Shayban related to us from Yahya who said: Abu Salamah informed me that he heard Ibn ‘Umar say: I heard God’s Messenger say: "A month is twenty-nine (days)." (Muslim 13/11)

5. Abu al-Walid related to us: Shu ‘bah related to us from Jabalah bin Suhaym who said that I heard Ibn ‘Umar saying that the Prophet said (showing his ten fingers thrice): "The month is like this and this" and left out (khanasa) one thumb the third time (Bukhari 3/132)

The above authentic citations from the Holy Quran and Ahadith unequivocally establishes the requirement for sighting the crescent moon of the month of Ramadan at the end of the 29th day of the previous month Sha’ban. If the moon has not been sighted due to haze, cloud, dust storms etc., then complete thirty days of Sha’ban and commence the fast for Ramadan irrespective of whether the crescent moon is sighted or otherwise. Similarly, after observing the fast for 29 consecutive days look out for the birth of the new moon of the succeeding month Shawwal and if the moon is similarly obscured by cloud, haze, storms etc., then complete thirty days of fasting and celebrate the joyous occasion of Eid. This is simple clear and concise, but then why is the controversy and confusion? There is no evidence that such confusion or controversy existed during the life time of the Holy Prophet (Sal.,) or during the period of the Thabi-een, or Thabi-ith-Thabieen (the successive generations of followers of the Holy Prophet (Sal) footsteps, with connections to the one who had been with the Prophet (Sal) or immediate companions. They followed what was stated in the Quran and by the Prophet (Sal) and did not go further. Therefore to understand the nature and extent of the controversy let us analyse another Hadith from Sahih Muslim, which will shed some light.

Opponents of the requirement of moon sighting and proponents of the Nujoomi calculation method quote the above Hadith in support of their opposition or proposition. They use the terms "We are an unlettered people. We neither write nor calculate…" to relate the Hadith to a particular period of time. That is the period during the lifetime of the Holy Prophet (Sal) and the Thabieen, the immediate followers of the Prophet (Sal). They argue that in the context of this Hadith, the people were illiterate at the time the Prophet (Sal) said this (NaoozuBillah) and did not know astronomical calculations and also did not have the means to verify. However, it is submitted that they cannot argue against the Quranic statement cited at the beginning of this section where God commands the faithful to "Fast when you see it" meaning the moon. (Allah Knows Best)

Having read translations of the Holy Quran by renowned scholars and the 9 volumes of Sahih Bukhari, 4 volumes of Sahih Muslim, and Imam Malik’s Muwattha, I could not find any support for differing from the Quran and the Ahadith’s in respect of sighting the new moon with the naked eye or completing the month in question as thirty days (when the moon is not visible). I will conclude this part by citing the following Ahadith by Abu Hurairah (RA) in Sahih Muslim and Bukhary:

1. Yahya bin Yahya related to us: Ibrahim bin Sa‘d related to us from ibn Shihab from Sa’id bin al-Musayyab from Abu Hurayrah that the Messenger of God said: "When you see the new moon, start fasting, and when you see it, end fasting. But if it is obscure for you, fast for 30 days sumu thalathin yawman." (Muslim)