Home » Lecture » Text » The Concept of Making an Apology in Islam

The Concept of Making an Apology in Islam

Dear brothers and sisters:
Mankind is created with a body and a soul. The body was created from dust while the soul is
breathed into that body by God as the Qur’an relates. Human creation is different from creation angels or Jinn. So human obviously is not an angel, immune from making mistake. By contrast, he is subject to committing mistakes as the Qur’an and the Sunnah acknowledge that. The Qur’an says, ‘…And Mankind was created weak. ’ [4:].

The Prophet [pbuh] also said, ‘Every son of Adam makes a mistake and the best of those who commit mistakes are the ones who seek forgiveness and make repentance.’ This is a proof that no one is perfect.

Dear brothers and sisters:
Making apology is a concept which exists in Islam. It exists in ibadat [worship] when we make
a mistake and in dealings. Islam gives us forms of making apology to correct our mistakes. In prayer for instance we make two prostrations, when we make a mistake. In Hajj, we make a sacrifice when we commit mistakes.

The Qur’an says: ‘O you who have believed, do not kill game while you are in the state of ihram. And whoever of you kills it intentionally – the penalty is an equivalent from sacrificial animals to what he killed, as judged by two just men among you as an offering [to Allah] delivered to the Ka‘bah, or an expiation: the feeding of needy people or the equivalent of that in fasting, that he may taste the consequence of his deed. Allah has pardoned what is past; but whoever returns [to violation], then Allah will take retribution from him…[5:95]

Another form of apology is blood-money which should be paid by the person who killed someone else by mistake. The Qur’an says: ‘And never is it for a believer to kill a believer except by mistake. And whoever kills a believer by mistake – then the freeing of a believing slave and a compensation payment presented to the deceased's family [is required] unless they give [up their right as] charity. …’ [4:92]

Dear brothers and sisters:
There are no humans better than prophets or messengers for they occupy the highest status and position. However, the Qur’an cites their apologies to Allah on many occasions. Adam for instance, apologized to Allah when he disobeyed Him.

The Qur’an says, ‘And We said, ‘O Adam, dwell, you and your wife, in Paradise and eat therefrom in [ease and] abundance from wherever you will. But do not approach this tree, lest you be among the wrongdoers.’ But Satan caused them to slip out of it and removed them from that [condition] in which they had been.

When they remembered their mistake, they apologized saying, ‘Our Lord, we have wronged ourselves, and if You do not forgive us and have mercy upon us, we will surely be among the losers .’ [7:24]

Another example is when Prophet Moses apologized for al-Khidr as the Qur’an relates in Surat al-Kahf when he the former was impatient. The Qur’an says, ‘And they found a servant from among Our servants to whom we had given mercy from us and had taught him from Us a [certain] knowledge.’ Moses said to him, ‘May I follow you on [the condition] that you teach me from what you have been taught of sound judgment? ’ [18:65-66] What happened in the end? [Moses] said, ‘Do not blame me for what I forgot and do not cover me in my matter with difficulty. [18:73]

Dear brothers and sisters:
The Qur’an also tells us about the situation between Prophet Muhammad [pbuh] and the blind man who came to him seeking knowledge and asking questions. The Prophet [pbuh] did not pay much attention to him because he was arguing with the people of Quraysh and conveying the message to them. The Qur’an relates that, ‘The Prophet frowned and turned away, Because there came to him the blind man, [interrupting]. But what would make you perceive, [O Muhammad], that perhaps he might be purified. Or be reminded and the remembrance would benefit him? As for he who thinks himself without need, To him you give attention. And not upon you [is any blame] if he will not be purified. But as for he who came to you striving [for knowledge], While he fears [Allah], From him you are distracted.’ [80:1-10] 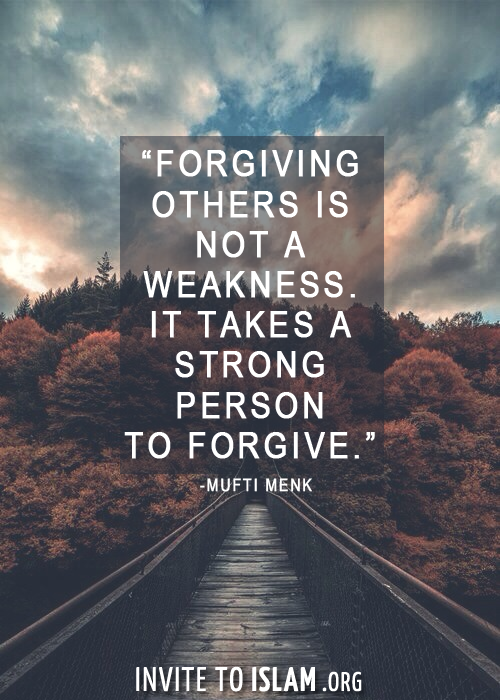 When these verses were revealed, the Prophet apologized to Ibn Umm Maktum and whenever he met him, he used to say to him, welcome to whom Allah blamed me for ignoring.
Dear brothers and sisters: To acknowledge your mistake and apologize is a good act and a noble deed for which the person will get great reward and gain the pleasure of Allah. Surely Allah is pleased with the apology and repentance of the person who acknowledges his mistakes and his sins.

The Prophet says, ‘He also said: ‘Verily, Allah is more pleased with the repentance of His slave than a person who has his camel in a waterless desert carrying his provision of food and drink and it is lost. He, having lost all hopes (to get that back), lies down in shade and is disappointed about his camel; when all of a sudden he finds that camel standing before him. He takes hold of its reins and then out of boundless joy blurts out: 'O Allah, You are my slave and I am
Your Rubb'. He commits this mistake out of extreme joy.’ [Muslim]

Among the noble consequences of making an apology is to end disputes and quarrels among people. Satan seizes the opportunity through the mistakes of those who dispute and his whispers prevent them making an apology to each other.

The Qur’an says: ‘And not equal are the good deed and the bad. Repel [evil] by that [deed] which is better; and thereupon the one whom between you and him is enmity [will become] as though he was a devoted friend. But none is granted it except those who are patient, and none is granted it except one having a great portion [of good]. And if there
comes to you from Satan an evil suggestion, then seek refuge in Allah. Indeed, He is the Hearing, the Knowing.’ [41:34]

Dear brothers and sisters:
There are obstacles that prevent a person from apologizing to others. These include:
1. Ignorance which is regarded as a dangerous disease. The ignorant person does not know the correct teachings of Islam which urge Muslims to confess their mistake toward each other and to apologize for doing it.
2. Pride and arrogance which are disliked in Islam is another reason for not making apology. Such person who has this pride denies the rights of others who are harmed by his mistake as he feels he is superior to them or better than them as Iblis did when he refused to prostrate for Adam.

Dear brothers and sisters:
We urgently need to understand the excellence of making an apology when we make mistakes
or commit a sin. Sorry is just a word, but it has a magic impact on the human self for it softens the hard heart, removes the mistake, and eradicates the dispute which might lead to fighting or committing a crime.

We need to understand this noble behaviour toward others, we need it in our homes, with our children, our wife, our neighbours, with our relatives, with non-Muslims as it surely solve various kinds of problems. The other side should Islamicly accept this apology.

Finally we ask Allah to guide us all