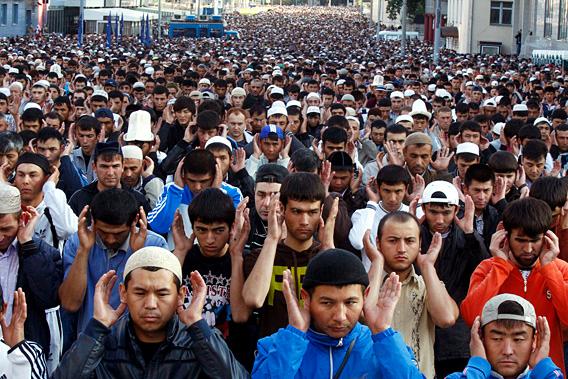 June 17 - 2015:  When Ramadan starts on Thursday, the faithful in St Petersburg and elsewhere in northern Russia will face an obstacle that the prophet surely didn’t envision: in June, the sun never truly sets.

These are the celebrated “white nights”, the period lasting from roughly late May to early July when a few hours of twilight is the closest it gets to true night. Although they are observed across the far north, white nights have the strongest association with St Petersburg, the northernmost city with a population of more than 1 million and Russia’s unofficial cultural capital.

When asked about the difficulty of keeping to this strict schedule, he said it was no burden for the faithful. “Islam is a way of life,” he said. “For us, fasting is the same as getting up in the morning and brushing your teeth.”

Although there are no exact figures on how many Muslims live in St Petersburg, last year’s Eid al-Fitr festivities, which mark the end of Ramadan fasting, drew 42,000 worshippers to the city’s two main mosques, according to the interior ministry. As often happens on major holidays, most could not fit inside and had to take part from the street.