Home » Lecture » Text » The Rights of Animals in Islam

The Rights of Animals in Islam 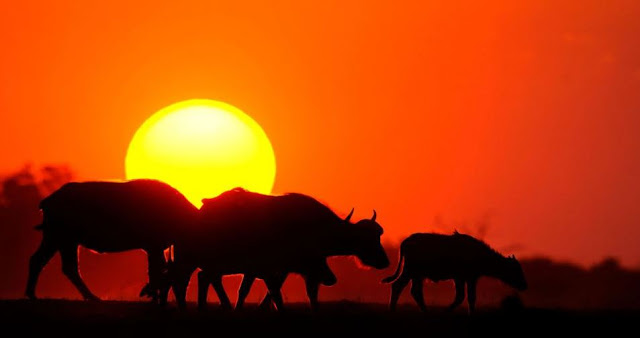 Dear brothers and sisters:
Animals are important creatures. Through animals, we have many beneficial products as milk, wool, meat…etc. Animals have many purposes and are used as such by humans. This does not mean that man has the right to treat animals the way that they want to. Therefore, it is our duty to protect them, treat them with kindness, and look after them. Although the Qur’an considers humans as occupying the highest status, it nevertheless strongly enjoins Muslims to treat animals with compassion and not to abuse them. Islam not only laid down the rights of humans regardless of race, colour, language and wealth, but also laid down the rights of animals. Animals, like humans are one of the creations of Allah.

Prophet Muhammad was not only sent as a mercy to Mankind but as a mercy to all creatures.
There are over two hundred verses in the Qur’an that deal with animals and six Surahs [chapters] of the Qur’an are named with the names of animals. The Arabic term for ‘animal’ [i.e. haywan] is mentioned only once in the Qur’an meaning ‘the true life’ rather than ‘animal’. The Qur’an usually uses the word Dabbah as a general term for all animals. However, the names of lots of different animals are mentioned in the Qur’an such as: the hoopoe, ants, pigs, cow, sheep, dogs, elephant, bees, ants, horses, donkeys, cattle …

Dear brothers and sisters:
The Qur’an emphasizes in many places the great status and the various benefits of animals.

The Qur’an says, ‘And cattle He has created for you [men]: from them you derive warmth, and numerous benefits, and of their [meat] you eat. And you have a sense of pride and beauty in them as you drive them home in the evening, and as you lead them forth to pasture in the morning. And they carry your heavy loads to lands that you could not [otherwise] reach except with souls distressed: for your Lord is indeed Most Kind, Most Merciful. And [He has created] horses, mules, and donkeys, for you to ride and use for show; and He has created [other] things of which you have no knowledge. [16:5-8] 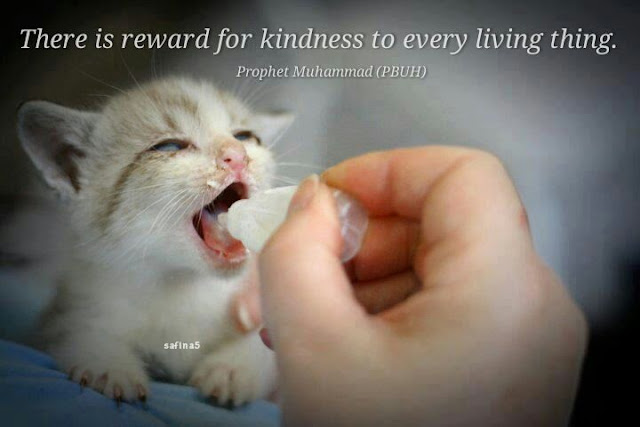 Allah has made wisdom, lessons, and admonition in the creation of animals. In other words, He created them to make us contemplate, think deeply, and learn lessons; however, not many people recognize this reality.

The Qur’an says, ‘And in cattle [too] you have an instructive example: from within their bodies We produce [milk] for you to drink; there are, in them, [besides], numerous [other] benefits for you; and of their [meat] you eat; And on them, as well as in ships, you ride. [23:21-22]

The Qur’an also says, ‘And verily in cattle [too] will you find an instructive Sign. From what is within their bodies, between excretions and blood, We produce, for your drink, milk, pure and agreeable to those who drink it.’ [16:66] It also mentions, ‘And there are [other] advantages in them for you [besides]; that you may through them attain to any need [there may be] in your hearts; and on them and on ships you are carried.’ [40:80]

Dear brothers and sisters:
Animals are created in different species, various colours and several races. In the Qur’an, every species is called by its Ummah or community or world such as the world of ants, the world of bees…etc.

The Qur’an says, ‘There is not an animal [that lives] on the earth, nor a being that flies on its wings, but [forms part of] communities like you. )othing have We omitted from the Book, and they [all] shall be gathered to their Lord in the end.’ [6:38] The Qur’an also says, ‘And so amongst men and crawling
creatures and cattle, are they of various color... [35:28]

Dear brothers and sisters:
Allah made the earth a place of living for animals and has given them the right to enjoy, eat, drink, and to reproduce. They have the right to live in peace and security. All what Allah has created is for us and for animals. The Qur’an says, ‘And the earth, moreover, hath He extended [to a wide expanse]; He draws out therefrom its moisture and its pasture; And the mountains hath He firmly fixed; For use and convenience to you and your cattle.’ [30:33-79]

Dear brothers and sisters:
Animals should also be protected and feel secure because they worship Allah, glorify Him, exalt Him, venerate Him, glorify Him and magnify Him, but we do not understand them. The Qur’an states that all the creation praises God, even if this praise is not expressed in the human language.

Allah says: ‘The seven heavens and the earth and all that is therein, there is not a thing but glorifies His praise. But you understand not their glorification.’ [17:44].

The Qur’an also says, ‘Sees you not that to Allah bow down in worship all things that are in the heavens and on earth, the sun, the moon, the stars, the hills, the trees, the animals, and a great number among mankind? …’ [22:18] 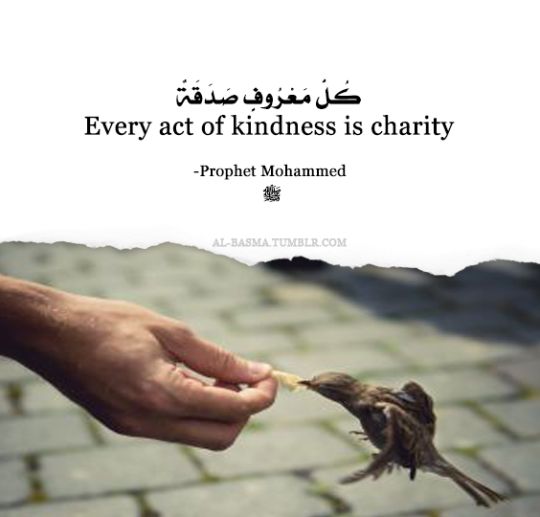 Dear brothers and sisters:
Islam urges Muslims to look after animals, to protect them, and not to abuse or threaten them. It warns those who abuse or torture, or imprison animals with severe punishment in the Hereafter. Islam forbids branding animals and killing them in vain, such as for sport. The Prophet Muhammad forbade people to capture birds, burn anthills, and whip animals. Even in slaughtering animals for food, Islam requires that the slaughtering be done according to Islamic procedure, which is humane and aims to cause the animals as little suffering as possible.

Mistreating animals is considered a sin in Islam. A Muslim is responsible for the care of animals so much so that an ill-treated animal will testify against the one who abused it on the Day of Judgment.
Abdullah ibn ‘Umar narrated that the Prophet [pbuh] said, ‘A lady was punished because of a cat which she had imprisoned until it died. She entered the [Hell] Fire because of it, for she neither gave it food nor water as she had imprisoned it, nor set it free to eat from the vermin of the earth.’ [al-Bukhari and Muslim]

It is also narrated that he said, ‘It is a great sin for man to imprison those animals which are in his power.’ [Muslim]

Anas said, ‘The Prophet has forbidden the shooting of tied or confined animals.’ [Bukhari] It is mentioned that Prophet Muhammad prohibited the act of inciting animals against each other. [Abu Dawud]

Similarly, it promises great reward in the Hereafter for those who protect and look after them.

Abu Hurairah narrated that the Messenger of Allah said, ‘While a man was walking along a road he became very thirsty. Then he came across a well, got down into it, drank [of its water] and then came out. Meanwhile he saw a dog panting and licking mud because of excessive thirst. The man said to himself, ‘This dog is suffering from the same state of thirst as I did.’ So he went down the well [again] and filled his shoe [with water] and held it in his mouth and watered the dog. Allah thanked him for that deed and forgave him.’ The people asked, ‘O Allah’s Apostle! Is there a reward for us in serving the animals?’ He said, ‘[Yes] There is a reward for serving any animal [living being].’ – [Al-Bukhari and Muslim]

The Messenger of Allah also said, ‘There is a reward for helping any living creature.’ [Al-Bukhari and
Muslim]

Mu`adh Ibn Anas said that the Messenger of Allah came upon some people who were sitting on their mounts and talking to one another. He said to them: ‘Ride them safely then leave them safely. Do not use them as chairs for you to have conversations in the streets and marketplaces, because the one that is ridden may be better than the one who rides it, and may remember Allah more than he does. [Ahmad]

`Abdullah Ibn `Amr said: ‘The Messenger of Allah forbade us from killing frogs.’’ [An-Nasa’i] The Prophet was one of the original animal rights activists. He had great respect for them, protected them and encouraged all his followers to be responsible in the way they treated them. 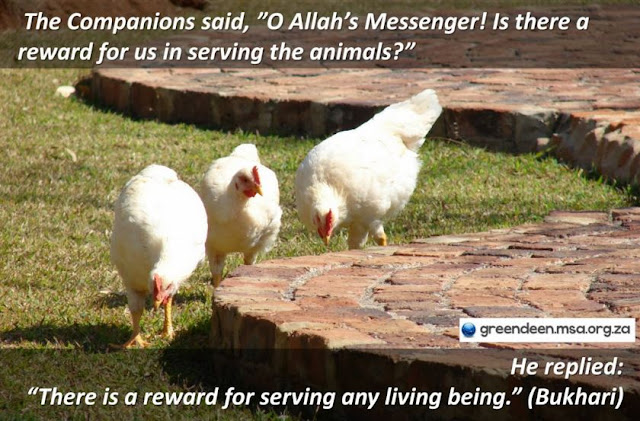 Dear brothers and sisters:
Animals have sensitivity and feeling like human. They are not deaf or dumb. They have their own languages and they talk to each other, but we cannot understand their language. It is possible that a human can talk to them by the way of a miracle as happened with Prophet Solomon who miraculously understood the language of birds and animals. The Qur’an relates: ‘At length, when they came to a [lowly] valley of ants, one of the ants said: ‘O you ants, get into your habitations, lest Solomon and his hosts crush you [under foot] without knowing it.’ [27:18]

Similarly, the hoopoe talked to Solomon as the Qur’an relates: ‘But the Hoopoe tarried not far: he [came up and] said: ‘I have compassed [territory] which thou hast not compassed, and I have come to thee from Saba with tidings true. [27:22]

Allah has given animals the power to see what humans cannot see, and hear what human cannot hear. There are many narrations, traditions and hadiths that confirm they can hear and see what human cannot. They can hear voices of dead people in graves, they can see hidden creatures like Satan and Jinn.’ The Prophet said, ‘When you hear voices of dogs and donkeys, seek refuge with Allah, as they see what you cannot see.’ [Ahmad and Abu Dawud]

Being brutal towards animals is a grave sin and Allah will punish him who treats the animals without
kindness. It is obligatory for the owner of the animal to feed it.

Dear brothers and sisters:
Some of you may not like the subject and say, let humans or Muslims get their rights first and then talk about the rights of animals. You are right if you mean humans in general and Muslims in particular are suffering everywhere due to injustice and oppression. All of us see what is happening to Muslims everywhere. Innocent people and civilians lose their lives every day in Iraq, Palestine, Afghanistan, and many other places around the world. We just hear words of condemnation with no actions from human rights organizations towards those innocent people. Action is taken only if the human belong to a powerful country.