Home » Lecture » Text » Moderation Is the Way of Islam

Moderation Is the Way of Islam

Dear brothers and sisters:
Among the characteristics of Islam is that it is a divine religion; a divine way, and divine guidance. It is also the religion for all people, all races, and all nations. It is also a valid religion for all times and places because it comprises all things that is needed at all times and places. Among the obvious characteristics of Islam also is that it is a religion of moderation [Wasatiyyah] which is the subject of the Khutbah today. I will deal with two things in this subject: the meaning of Wasatiyyah [moderation]; and the aspects of Wasatiyyah in the rules of Islam and Shari’ah.

The most important aspect of these qualities is Al-Wasatiyyah [moderation, justness] that shows the true picture of Islam, its beauty and how it protects noble human values. Allah says, “Thus We have made you [true Muslims] a just [and the best] nation, that you be witnesses over mankind and the Messenger [Muhammad] be a witness over you. [Al-Baqarah 2:143]

It is necessary to define this term in the light of the Qur’an and Sunnah in order to avoid misconceptions especially these days when the campaign against Islam has become more vicious, so that Muslims are labelled with defamatory terms, that realities have been turned upside-down and some Muslims have been afflicted with keeping away from its illuminating path.

Dear brothers and sisters: Muslim scholars show great concern that the actual meaning of Al-Wasatiyyah be explained as it is mentioned in Surat al-Baqarah. It has only two meanings: [1] the best and the most just. This is the one chosen by At-Tabari and Ibn Kathir. [2] This means just and balanced between extremism and negligence. This meaning was mentioned when Allah reminds this Ummah of His favour on it.

In Arabic, it means balance or equality between two opposite things. It is also the middle of any two contradicted sides; not to incline to this side or to the other. There is equality between the two sides of all things. So Islam, for example, is the middle between materialism and spirituality; reality and imagination; individuality and community; between change and stagnation, [consistency]; and between mind [reason] and sympathy [emotion].

Wasatiyyah also means the straight path; right way; and being away from inclination to one party [side] above the other. It also means the priority and superiority, and the best status. For example, the leader of people is always in the middle of the people; and in the best place, like the gem of a necklace is in the middle. In addition, things which are in the middle are always protected and safe while things which are on side or extreme are always subject to danger and risks. There is an Arab proverb that says: ‘The best decision in all affairs is that which is moderate.’ Moderation is stability and safety while extremism is diversion and corruption. Moderation is strength because the middle thing is the centre of power. The Sun for example is most effective when it is in the middle of the sky; and man is strong during middle age.

What Are the Aspects of Wasatiyyah?

Dear brothers and sisters: Moderation and justice feature in all aspects of Islam. In creedal issues, Islam maintains moderation among other religions. There is neither atheism nor idolatry but a sincere servitude to Allah in His Lordship, His exclusive right to be worshipped, and in His Names
and Attributes. The Islamic creed is balanced between assimilating the attributes of Allah, changing them, or suspending them. On the issue of Al-Qadar [divine pre-decree], it strikes a balance between those who deny it outright and those who go to another extreme of believing that man is forced to do all things. Islam also strikes a balance between those who believe that actions have nothing to do with Imaan and those who believe that the perpetrators of major sins are no longer believers.

With regard to Prophets and Messengers, Islam maintains a moderate view between those who take their Prophets and their companions as lords besides Allah and those who disrespect them. The true Muslim believes in all the Prophets, Messengers, and in all Allah’s revealed Books. They love the sincere worshippers of Allah and they invoke His pleasure on the companions of the Messenger. 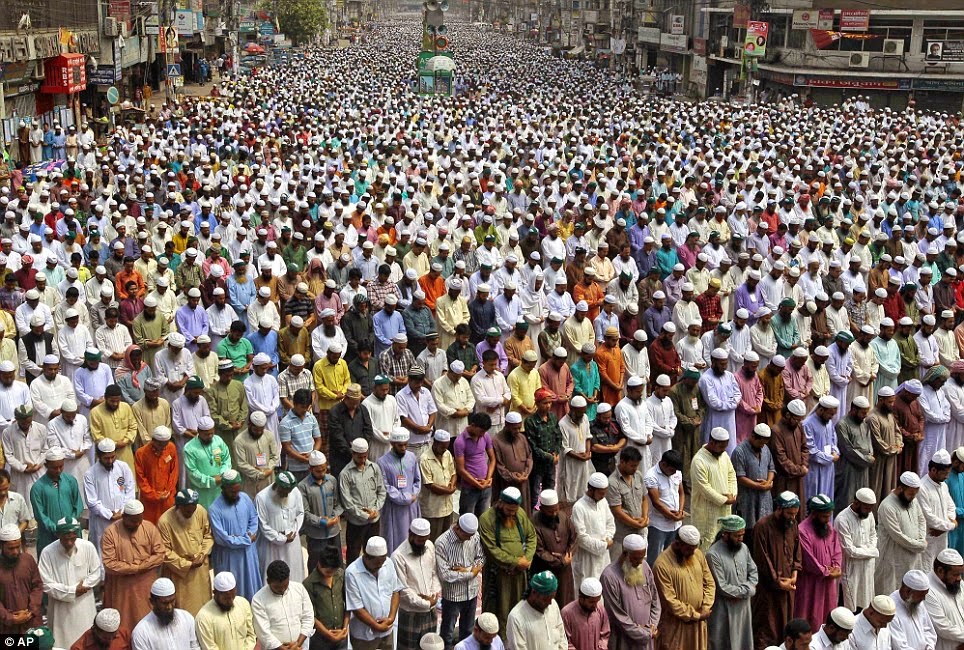 Dear brothers and sisters: The important aspects of Islamic moderation are obvious in acts of worship. Islam gives consideration to the natural needs of man and makes a wonderful harmony between the needs of the soul and those of the body. In Islam, neither asceticism nor materialism is encouraged, but coexistence between the needs of the body and those of the soul in the light of the word of Allah.

In the Sunnah the Messenger of Allah also refuted ‘Uthmaan bin Maz’hoon’s ascetic lifestyle and refuted those who forbade for themselves the lawful things of this world saying, “Amongst you, I am the one who fears Allah most and I am the most pious; but yet I fast and I eat, I pray and I sleep and I marry women. So whoever turns away from my way is not of my Ummah.” [Al-Bukhari] He also said, “This religion is easy. So practice it gently. No one is harsh by this religion except that it overpowers him.”

In the methodology of study and deducting evidence, Islam maintains moderation is treating sources of knowledge and strikes a balance between texts and reason; between the world of the unseen and our physical world. In promoting the goals of Shari’ah, Islam maintains moderation in actualising what is beneficial for mankind and preventing what is harmful.

In the economic system, Islam strikes a balance between the individual and communal liberties. It respects individual ownership as long as it does not harm the interests of the whole society. Islam is moderation between capitalism and socialism.

Furthermore, in the area of individual freedom of opinion and behaviour, Islam makes some regulations for this, so that the preservation of what is lawful and what is unlawful may be guaranteed.

In the field of politics, Islam strikes a balance between other systems, explains the rights of the ruler and the ruled, encourages justice, truthfulness, security, peace, and obedience to the constituted authority in all that is good.

Islam in its justness and moderation harmonises between originality and modernity. Through its flexibility, it goes along with constructive development that is in line with Islamic principles and in this way it prevents the dissipation of its values.

Dear brothers and sisters:
The moderation of Islam comprises all matters of religion, this worldly life, and the Hereafter. This is doubtlessly, a manifestation of Islam’s inimitability and validity for all times and places. It also emphasises the enormity of the Muslims’ responsibility affirmed in the saying of Allah, “That you may be witnesses over mankind.”

The Muslim nation is in dire need of moderation and justness in dealing with corruption that has infested all aspects of its life. The scholars and truthful reformers have a major role to play in this. They will be held responsible before Allah and the rest of the ummah as well as the growing generation.

The moderation of this religion does not stop at matters of worship alone, but encompasses all aspects of human behaviour, human interactions, and the manners of dressing, eating, and so on. It completely regulates all these in the most excellent way.

Finally, we ask Allah to reform all affairs of Muslims, to provide us with strong will to change our state for the better, to provide the entire Muslim Ummah with glory, strength and unity. We ask Him also to accept our deeds, prayers and supplications. Ameen