The Story of Jesus [pbuh] and Mary in Islam

Dear brothers and sisters:
Last Friday, I dealt with the story of Maryam [Mary] and her family who Allah chose over
all mankind. I mentioned that the family of ‘Imran are ‘Imran, his wife Hannah, the mother of Mary and Mary, the mother of Jesus, and her son Jesus. The family of ‘Imran were pious, noble and righteous people. Their story is mentioned in the Qur’an and is one of the longest Surahs.

Today, I will deal with the story of the Messiah ‘Isa, son of Mary and his life in Islam. The Qur’an says, ‘In their stories, there is a lesson…’ [12:] so the purpose of these stories is to learn, take wisdom, admonition and advice. The Prophet [pbuh] said, ‘I am the supplication of my father Ibrahim, and the good tidings of my brother `Isa. The night I was delivered my mother saw a light that lit the castles of Damascus so that she could see them.’

‘Isa, who is nicknamed by the messiah, the son of Maryam [Mary] is a messenger of God and God’s promise to Mary, his mother. He gave glad tidings of Prophet Muhammad’s coming. He was given signs and proofs; held in honor in this world and the Hereafter and is of (the company of) those who are nearest to Allah. He spoke to the people in childhood and in maturity. He is (of the company) of the righteous. Allah taught him the Book and wisdom, the Law and the Gospel, and (appointed him) a Messenger to the Children of Israel, (with this message). He went to them, with a sign from the Lord, he made the figure of a bird, from clay, and breathed into it, and it becomes a bird by Allah's leave. He healed those born blind, and the lepers, and he quickened the dead, by Allah's leave. He told them what they should eat, and what they should store in their houses. Surely therein is a Sign for you if ye did believe; ‘(I have come to you), to attest the Law which was before me. And to make lawful to you part of what was (before) forbidden to you; I have come to you with a Sign from your Lord. So fear Allah, and obey me.’ [3:45:50]

Dear brothers and sisters:
Jesus’ birth was a miracle, his life was full of miracles. His mother Mary was known for her piety, righteousness, and purity. The Qur’an says, ‘ And Mary, the daughter of 'Imran, who guarded her chastity; and We breathed into (her body) of Our spirit; and she testified to the truth of the words of her Lord and of his Revelations, and was one of the devout (Servants). [66:12]
Prophet Muhammad mentioned the excellence of Mary: ‘Many among men attained perfection, but among women none attained perfection except Mary the daughter of ‘Imran, and Asiya the wife of Pharaoh; and the superiority of ‘Aishah to other women is like the superiority of Tharid [an Arabic dish] to other meals.’ 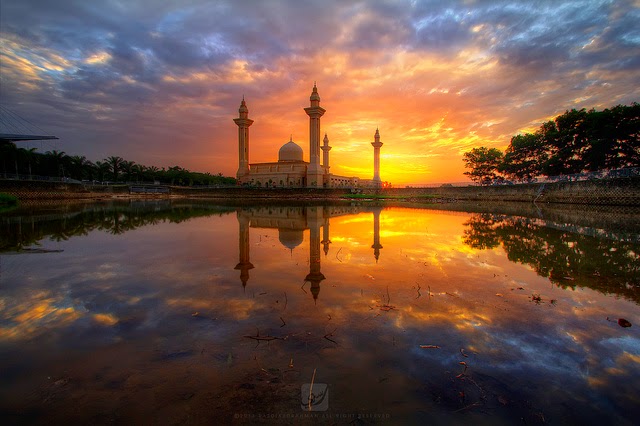 The Qur’an gives Mary glad tidings of her son Jesus. The Qur’an says, ‘Behold! the angels said: ‘O Mary! Allah gives Thee glad tidings of a Word from Him: his name will be Jesus. The son of Mary, held in honor in this world and the Hereafter and of (the company of) those nearest to Allah; ‘He shall speak to the people in childhood and in maturity.
And he shall be (of the company) of the righteous.’
She said: ‘O my Lord! how shall I have a son when no man has touched me?’ He said: ‘Even so: Allah creates what He will: when He has decrees a plan, He says, `Be', and it is!

Dear brothers and sisters:
when the Jews and her people saw the miracle of Jesus’ birth, they asked Mary about the baby and scolded her. The Qur’an declares, ‘They scolded her: ‘This is a terrible sin that you have committed.’ She put her finger to her lips and pointed to the child. They asked: ‘How can we speak to a newborn baby?’ To their total amazement, the child began to speak clearly: ‘I am Allah's servant. Allah has given me the Book, and has made me a prophet, and has blessed me wherever I may be, and has enjoined on me prayers and alms-giving as long as I live. Allah has made me dutiful towards she who has borne me. He has not made me arrogant nor unblessed. Peace unto me the day I was born, the day I die and the day I shall be raised alive.’ [19:30-33]
The Jewish priests felt this child Jesus was dangerous, for they felt that the people would turn to him; displacing the existing Jewish tenets. Consequently, they would lose their authority over the people. Therefore, they kept the miracle of Jesus's speech in infancy a secret and accused Mary of a great misdeed.
As Jesus grew, the signs of Prophethood began to increase. He could tell his friends what kind of supper waited for them at home and what they had hidden and where. When he was twelve years old, he accompanied his mother from Egypt to Jerusalem.
On the night that the two noble prophets John and Zechariah died, killed by the ruling authority, the revelation descended upon Jesus. Allah commanded him to begin his call to the children of Israel. To Jesus, the life of ease was closed, and the page of worship and struggle were opened.
Jesus' call, from the beginning, was marked by its complete uprightness and piety. Jesus invited the people to Allah.

His call was based on the principle that there is no mediation between the Creator and His creatures. Jesus continued to invite people to worship the Only Lord, Who is without partner, just as he invited them to purify of the heart and soul. Jesus saw that those who believed in him were from among the poor, the wretched, and the downtrodden, and
their number was small. Among those who believed in him were twelve people [disciples].
Some of the miracles which Jesus performed were been requested by his disciples, such as their wish for a ‘holy table’ to be sent down from heaven. The Qur’an says, ‘(Remember) when the disciples said: ‘0 Jesus, son of Mary! Can your Lord send down to us a table spread (with food) from heaven?’ Jesus said: ‘Fear Allah, if you are indeed believers.’
They said: ‘We wish to eat thereof and to be stronger in Faith, and to know that you have indeed told us the truth and that we ourselves be its witnesses.’

Jesus, son of Mary, said: ‘0 Allah, our Lord! Send us from heaven a table spread (with food) that there may be for us - for the first and the last of us - a festival and a sign from You; and provide us sustenance, for You are the Best of sustainers.’ Allah said: ‘I am going to send it down unto you, but if any of you after that disbelieves, then I will punish him with a torment such as Iha ye not inflicted on anyone among (all) the Alamin (mankind and jinn) .’ Surah 5: 112-116 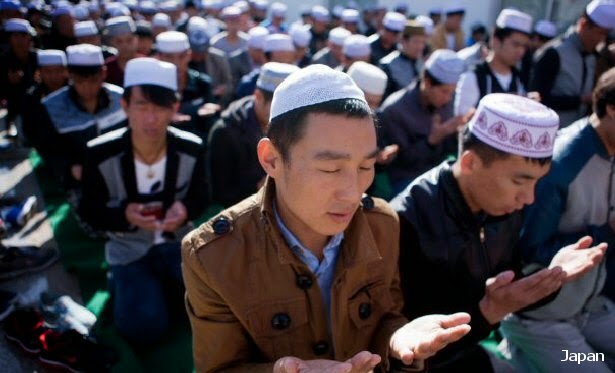 Dear brothers and sisters: the Qur’an relates this conversation between God and Jesus: And (remember) when Allah will say (on the Day of Resurrection): ‘0 Jesus son of Mary! Did you say unto men: 'Worship me and my mother as two gods besides Allah?’' He will say: ‘Glory be to You! It was not for me to say what I had no right (to say). Had I said such a thing, You would surely have known it. You know what is in my inner-self though I do not know what is in Yours, truly, You, only You, are the All-Knower of all that is hidden and unseen. Never did I say to them anything except what You (Allah) did command me to say: 'Worship Allah, my Lord and your Lord', And I was a witness over them while I dwelt amongst them, but when You took me up, You were the Watcher over them, and You are a Witness to all things.. If you punish them, they are Your slaves, and if You forgive them… 5: 116-119]

Dear brothers and sisters: His teaching annoyed the priests, for every word of Jesus was a threat to them and their position, exposing their misdeeds. So, they planned to get rid of him.
The Qur’an affirms that Allah did not permit the people of Israel to kill Jesus or crucify him. What happened was that Allah saved him from his enemies and raised him to heaven. They never killed Jesus; they killed someone else.

Allah the Almighty declared: ‘And because of their saying (in boast), ‘We killed Messiah Jesus, son of Mary the Messenger of Allah,’ - but they killed him not, nor crucified him, but the resemblance of Jesus was put over another man (and they killed that man), and those who differ therein are full of doubts. They have no (certain) knowledge, they follow nothing but conjecture. For surely; they killed him not: But Allah raised him (Jesus) up (with his body and soul) unto Himself (and he is in the heavens). ’ [4: 157]

And what about the verse that says: And (remember) when Allah said: ‘0 Jesus! I will take you [mutawafika] and raise you to Myself and clear you (of the forged statement that Jesus is Allah son) of those who disbelieve …’ [ 3: 55], the answer here is that the word mutawafika means that Allah made him sleep, and will then raises him.

Dear brothers and sisters:
Another point that I want to deal with are the changes that the Jews made in Jerusalem and around Al-Aqsa Mosque every day in order to alter the sites of the city. It is our duty as Muslims, both individuals and governments to face these plans and stop the silence.

The final point I would like to draw attention to is the deadly swine flu virus. This is one of a series of diseases and disasters that have appeared recently and destroy humans. Other diseases and trials include bird flu, floods, storms, poverty, recession and many others. Everyone should be aware and be careful about swine flu and take all possible precautions to protect themselves from this virus. These problems show that despite advances in technology, humans are weak. We ask Allah to protect everyone from this deadly virus.

Dear brothers and sisters:
I ask Allah to liberate Jerusalem and al-Aqsa mosque and to guide us all.