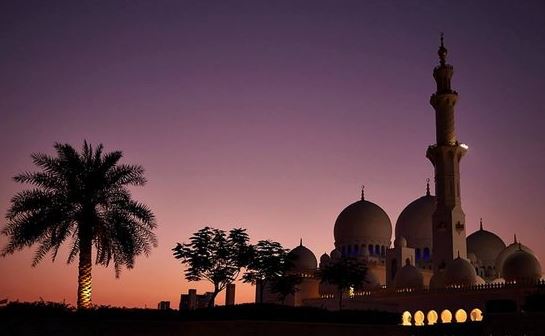 His Grace which presented us with this opportunity to turn towards Him and seek His pleasure in all that we say and do in preparation for our meeting with Him. A meeting about which there is no doubt. His Grace which stacked the odds in our favor by giving us multiple rewards for the same actions. His Grace which chained the Shayateen and opened the doors of Tawba (repentance) for those who seek to change themselves and their lives. His Grace which multiplied the reward of all Fara’aidh seventy times that of the same deed at other times and of the Nafl, equal to the Fardh in other times. Ramadan is the biggest sign of His Grace, which He sends us, every year of our lives.

His Majesty, feeling the awe of which is the root of all goodness, the foundation of all good actions, the purpose of our lives – to recognize our Creator, Owner, Provider and whose Law we follow (Al Khaliq wal Malik, wal Raziq, wal Haakim). It is this feeling of the Majesty of Allahجل جلاله in the heart which is called Taqwa – the fear of displeasing the One we love the most. Allahu Rabbul A’alameen – Allahجل جلاله, the Rabb of the worlds (all those He created, sustains and protects). It is when the slave feels this connection, that he makes the changes he needs to make in his/her life to become obedient to Allahجل جلاله. It is when he/she feels this awe of Allahجل جلاله’s Majesty that the slave becomes a Muttaqi and thereby eligible for the promises of Allahجل جلاله’s help in every aspect of his life. Remember that all the promises of Allahجل جلاله are for the Muttaqoon and Muhsinoon. Ramadan comes to help us to become Muttaqeen. Allahجل جلاله said about this:
يَا أَيُّهَا الَّذِينَ آمَنُواْ كُتِبَ عَلَيْكُمُ الصِّيَامُ كَمَا كُتِبَ عَلَى الَّذِينَ مِن قَبْلِكُمْ لَعَلَّكُمْ
تَتَّقُون

His Forgiveness is the biggest gift that Ramadan brings. A month in which Allahجل جلاله frees slaves from the Fire. A month when shuts the door of Jahannam and opens the doors of Jannah. A month in which Allahجل جلاله prescribed fasting and said, ‘The fast is for me and I will reward it.’ He didn’t specify what the reward would be. He merely said that He would reward it. One can only imagine (in reality beyond imagination), what that reward would be; a reward in keeping with the Majesty and Grace of Rabbul A’alameen.

It is precisely to reinforce this message that Ramadan comes every year. A training period to remind us to do only what Allahجل جلاله ordered, only because He ordered it. So, in Ramadan, that which is normally Halaal, also becomes Haraam for a period of time every day; for no reason, other than that Allahجل جلاله ordered it. This is the principle behind every Ibaadah (act of worship). Why do we pray (Salah) in a certain way and not in a different way which may be more convenient or ‘logical’? Why do we give a certain amount of charity as Zakat and not more or less? Why is Zakat obligatory on certain forms of wealth and not on others, even if the others may be more valuable? Why do we dress in a certain way in Hajj? Why do we call standing in Arafah, Hajj, instead of Tawaf of the Ka’aba?

I can mention more but these examples will suffice to show that we do all these things for one reason only, i.e. because Allahجل جلاله ordered us to do so. This is to reinforce the concept of Taqwa which is the brand of the Muslim. In Ramadan, as I mentioned, even the Halaal becomes Haraam because Allahجل جلاله ordered it. Only to emphasize the importance of leaving the Haraam at all times for the same reason, i.e. because Allahجل جلاله ordered it. It is our Nafs (self, desire) which comes in the way of this, aided and abetted by Shaytaan and his cohorts and gets us to disobey Allahجل جلاله to please ourselves and our foolish friends. Ramadan comes to bring us all back on track so that we leave these habits of ignorance. Ramadan comes to teach us to say, ‘I am fasting’, if we are faced with something that goes against the spirit of obedience to Allahجل جلاله. Ramadan comes to teach us to say, ‘I am fasting’, in spirit, in the rest of the year for the same reason to every form of disobedience to Allahجل جلاله. That is the purpose of every training course, to bring about behavioral change. Psychologists tell us that habit change takes 21 days. Ramadan gives us 30. Let us pray that Allahجل جلاله enables us to change our habits and become obedient to Him. I remind myself that one Ramadan will be our last. Let us make use of this one as if it is our last for it may well be. I ask Allahجل جلاله for His help.

Baqara 2: 186. And when My slaves ask you (O Muhammadصلى الله عليه وسلم) concerning Me, then (answer them), I am indeed near. I respond to the dua (plea) of the supplicant when he calls on Me (directly). So, let them obey Me and believe in Me, so that they may be rightly guided.

How can we thank our Rabb enough for being so responsive to us? Remember that the Qur’an is the living speech of Al Hayyul Qayoom – The Ever Living and the Established (who establishes everything but needs nothing for His own establishment). The Ayaat are speaking to us in real time. They were revealed to Rasoolullahصلى الله عليه وسلم in the 7th century but speak to us in real time across the centuries and will continue to do so until the earth exists. To every Muslim, the Qur’an is his or her personal revelation. To be read and understood as Rasoolullahصلى الله عليه وسلم read and taught it and to be practiced as he practiced it. He is the touchstone, the criterion for right and wrong in terms of understanding and practice of the Qur’an and its commandments. That is the importance of the Sunnah and the reason Allahجل جلاله sent His Messengerصلى الله عليه وسلم, so that His Word may be recited, explained and demonstrated as a standard and benchmark for all time. The Qur’an and Sunnah are intertwined, supporting one another and reflecting one another. The Kitab (Book) of Allahجل جلاله and the Sunnah (Way) of His Messengerصلى الله عليه وسلم
is the foundation of Islam.

That is why in the middle of the Ayaat relating to Ramadan and fasting, Allahجل جلاله
revealed this Ayah about dua. When the slave becomes conscious of his Rabb and becomes concerned about pleasing Him, he asks about Him. And Allahجل جلاله says, ‘When my slave asks about me, I am indeed near him. I respond to his dua (supplication). So, let him obey me and have faith in me so that he may be rightly guided.’ The promises of Allahجل جلاله are conditional upon our actions. For dua to be answered, one must be obedient and have faith in Allahجل جلاله.

Truly the Mercy of Allahجل جلاله is boundless because as the month progresses and the slaves fast and fill the Masaajid and stand in the night in Taraweeh, Allahجل جلاله  opens the doors of His bounty even wider. We come to the last third of the month, the last ten days. In the nights of these days, Allahجل جلاله concealed the gift of Laylatul Qadr (Shab-e-Qadr, Night of Decree). About this night and the reward of worship during it, Allahجل جلاله said:

One night, the worship during which is more rewarding than worshipping Allahجل جلاله continuously for 1000 months (83 years and 4 months). How much more? As much as is in keeping with the Grace and Majesty of my Rabb. Rasoolullahصلى الله عليه وسلم told us to search for this night in the last ten nights of Ramadan and more specifically in the odd nights. It is for this reason that he used to make Itikaaf (seclusion) in the masjid during the last ten nights of Ramadan. This is something he did without fail and the purpose of it was to find and benefit from Laylatul Qadr. Following this Sunnah of Itikaaf, is something that has become more widespread of late but it is for each of us to ask this question to himself, ‘What is the value of 83 years and 4 months of accepted worship of Allahجل جلاله on a day when one single good deed and its reward can spell the difference between Jannah and Jahannam?’ And since we don’t know if this will be our last Ramadan and since we claim to have Imaan on Allahجل جلاله and on the Day of Judgment, let us decide what to do in the last ten nights of Ramadan.

The biggest reward of Itikaaf is that the Mu’takif (one making Itikaaf) is sure to get Laylatul Qadr (Insha’Allah) because the entire period of Itikaaf and all Halaal actions in it, including sleeping are considered to be worship. So, if one is in Itikaaf in the masjid and asleep during Laylatul Qadr he would still get the reward of the night as a mercy from Allahجل جلاله. This alone should be enough to bring anyone into the masjid for Itikaaf in Ramadan. I am trying to make the decision point as clear as possible since we are all susceptible to Shaytaan who will try to convince us that the world will come to a halt if we make Itikaaf. I ask Allahجل جلاله to help us to prove our Imaan with our actions, because that is the only form of proof that will work on the Day of Judgment.

Remember that this dua was given by Rasoolullahصلى الله عليه وسلم to one of the most beloved of all people to him, Ayesha (RA) when she asked him what dua to make in this time (Sunan Tirmidhi and others). So that makes the dua extra special. Some other things that make this du'aa special: ‘afoo means to wipe away without a trace, meaning that the sins will not be mentioned on the Day of Judgement, as if we never committed them (unlike Maghfirah which means to forgive the sin but it will still be documented and presented on the Day of Judgement). Al-’Afuw is also is one of the majestic names of Allahجل جلاله.