Home » Prophets » I have only been sent to perfect good moral character.

I have only been sent to perfect good moral character.

Abū Hurayrah relates that Prophet Muhammad (peace be upon him) said: “I have only been sent to perfect good moral character.” [Musnad Ahmad (8595)]

The purpose of all the revealed books has always been inner purification. Abraham prayed to his Lord to send to his descendants a Messenger who would recite His signs to them, teach them the scripture, and purify them. Allah answered his prayer by sending Muhammad . Allah says: “It is He who has sent amongst the unlettered people a messenger from among themselves, to rehearse to them His Signs, to purify them, and to instruct them in the scripture and wisdom,- although they had been, before, in manifest error.” [Sūrah al-Jumu`ah: 2] 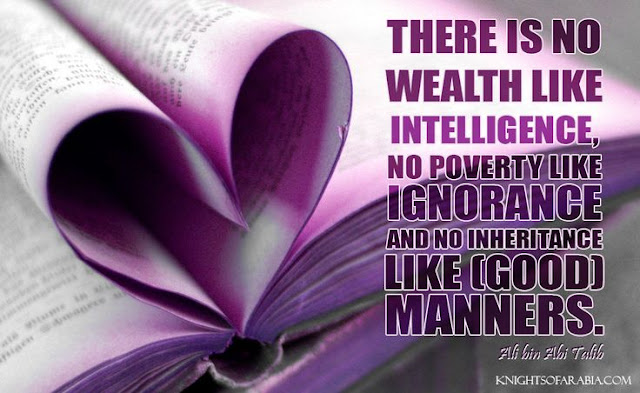 This great purpose is what Prophet Muhammad declared when he said: “I have only been sent to perfect good moral character.” [Musnad Ahmad (8595)]

The “good moral character” referred to here is comprehensive. It includes how we conduct ourselves with our Lord, how each of us relates to his or her self, and how we treat other people.

The Prophet’s statement implies there are two types of good moral conduct. The first is common knowledge. People know it instinctively. The other type is that which completes and perfects it. This cannot be known without Allah’s guidance through revelation. The Prophet was sent to teach it to the people as part of the message he brought.

The Prophet’s guidance in this matter is vast. Many books have been written about it. One of the most famous hadith in this regard is where the Prophet said: “Nothing weighs heavier in the balance on the Day of Judgement than good character. Allah hates that which is wanton and base.” [Sunan al-Trimidhī (2002) and Sunan Abī Dāwūd (4799)]

The Prophet’s servant Anas observed: “Allah’s Messenger had the best character of all people.” [Sahīh al-Bukhārī (6203) and Sahīh Muslim (2150)]

He also said: “I have never touched silk of any quality that was softer than the hand of Allah’s Messenger. I never smelled a scent that was sweeter than his.” [Sahīh al-Bukhārī (1973, 3561) and Sahīh Muslim (2330)] 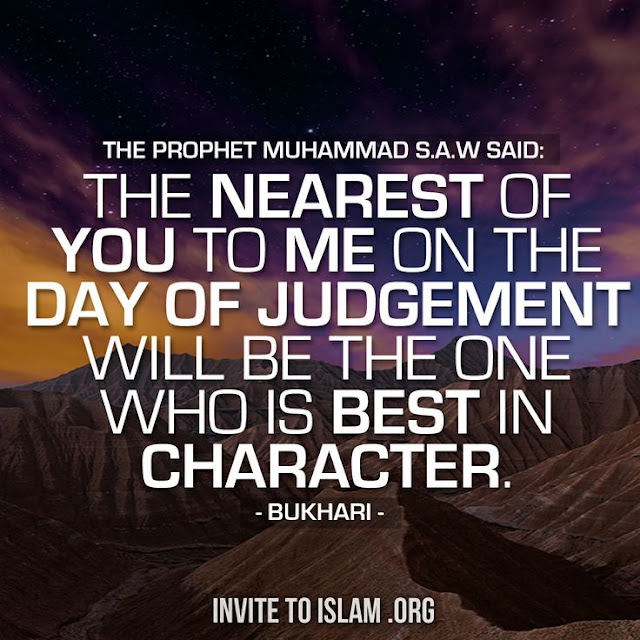 Al-Nawwās b. Sam`ān asked the Prophet about righteousness and sin. He replied: “Righteousness is to exhibit good character. Sin is what disturbs your heart and you hate for others know about it.” [Sahīh Muslim (2553)]

He also said: “A believer can attain though good character the blessings and rewards of fasting and prayer.” [Sunan Abī Dāwūd (4798)]

It is enough for us to look at the Prophet’s life and observe how he treated people of all walks of life, how he behaved with his household, his relatives, his Companions, and his enemies.

Once the Prophet borrowed money from a man, and the man came demanding payment, speaking very harshly. The Companions wanted to respond to the man’s harshness, but the Prophet said: “leave him alone. The one who has a right to something is allowed to speak.” [Sahīh al-Bukhārī (2306) and Sahīh Muslim (1601)]

Whenever the Prophet borrowed something from someone, he would always return it with more and pray for that person. He used to say: “The only reward for a loan is complete repayment and praise.” [Musnad Ahmad (16410)]

A Jewish rabbi, Zayd b. Sa`nah, came to the Prophet demanding repayment. He grabbed the Prophet by the front of his shirt, scowled in his face, and said: “Muhammad, aren’t you going to pay me my due? By Allah! I did not know the family of `Abd al-Muttalib to be late in paying their debts. I have dealt with them before and know them.”

`Umar grabbed the man and said: “Enemy of Allah! Do you speak these words I hear to Allah’s Messenger and behave towards him like this! I swear by the One who sent him in truth, if I did not fear the consequences, I would strike your neck with my sword.”

The Prophet watched `Umar quietly and deliberately. Then he said: “I we need something entirely different from you, `Umar. You should be telling me to repay the debt well, and telling him to ask nicely. `Umar, go with him and pay him what is due to him and increase it by twenty sa` measures, for your upsetting him.” [Sahīh Ibn Hibbān (288)]

`Abd Allah b. Salām was one of the leading Jewish scholars in Madinah. He was just-minded and a seeker of the truth. When he heard about Prophet Muhammad’s arrival, he went to have a look at him. When he saw the Prophet’s face , he knew that it was not the face of a liar. The first thing he heart the Prophet say was: “O people! If you spread the greeting of peace among you, feed those who need food, uphold kinship ties, and pray at night while people are sleeping, you will enter Paradise with ease.” [Sunan al-Tirmidhī (2485)]

`Abd Allah b. Salām was able to read from the Prophet’s countenance the signs that he was honest, trustworthy, and pure-hearted. Such a countenance is only for people whose hearts are truly pure, whose conduct is righteous, and who devote themselves to Allah. 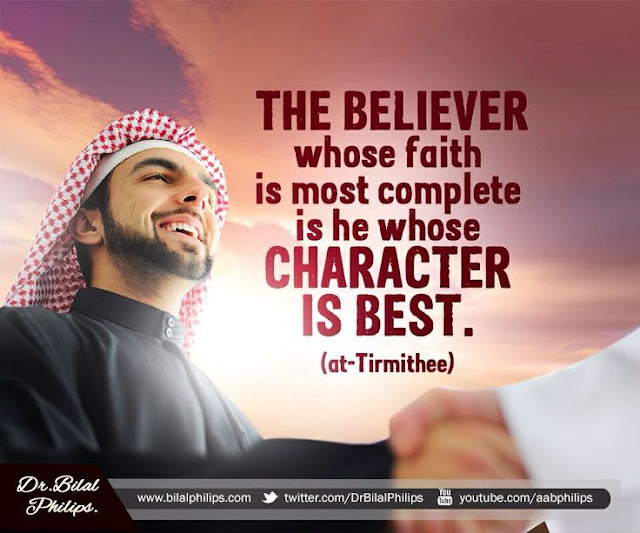 The Four Foundations of Good Character

There are many ways to exhibit good character. However, it all goes back to four essentials.

Fasting is the companion of patience. The month of Ramadan is an invitation to forgive, forget, and renew our relationships with family, co-workers, and neighbours with whom our affections have become strained Allah says: “Let them pardon and overlook. Do you not wish that Allah should forgive you? And Allah is Forgiving and Merciful.” [Sūrah al-Nūr:22]

2. Decency: This is the quality that helps people abstain from base and ignoble behaviour and turns their hearts to that which is noble and high-minded.

3. Courage: This is the quality that inspires people to greatness and generosity and prevents them from succumbing to anger and rash behaviour.

4. Justice: This quality applies to dealing with oneself as well as others. This includes being moderate in behaviour. Every noble character trait stands between two ignoble traits at opposite extremes. If people becomes neglectful of the noble trait, they fall into one of the bad ones. If they go to excess in it, it brings them to the other bad quality.

For instance, gentleness is a good character trait, akin to kindness. However, taking it to an excess leads to indignity and humiliation, while being neglectful of it leads to harshness, cruelty, and severity. Generosity is another good and desirable character trait. Taking it too far leads to reckless spending and wastefulness, while neglecting it makes one a greedy, envious miser.

People naturally possess many good qualities and character traits, some of which they learned from their parents or picked up from their social environment. These qualities become part of their personalities. Prophet Muhammad said to Ashajj `Abd al-Qays: “You possess two qualities that Allah loves: gentleness and forbearance.” [Sahīh Muslim (170]

In some narrations of this event, Prophet Muhammad goes on to tell Ashajj that Allah made these traits part of his natural disposition, to which Ashajj replied: “Praise be to Allah who placed within me two qualities that Allah and His Messenger love.” [Sunan Abī Dāwūd (5225)]

How to Develop Good Character

1. Striving within yourself to exhibit good character traits and refrain from bad ones. Allah says: “Those who strive for Our sake, We will guide them to Our paths.” [Sūrah al-`Ankabūt: 69] Good character is part of Allah’s guidance.

2. Self-assessment. This means to look back on one’s behaviour. Those who call themselves to account benefit from it in all aspects of their lives. This is why Allah swears by the “self-reproaching spirit” in the Qur’an. Al-Hasan al-Basrī explains that the self-reproaching spirit describes the spirit of the believer.

3. Aspiring for the best. We should aspire to be the best we can be , and this includes our behaviour. We should seek out and even create opportunities to exhibit good behaviour.

4. Substitution. We should find alternatives to the bad behaviour that we exhibit, alternatives that allow us to express and develop our good traits.

We are influenced by the people around us, by our families, classmates, colleagues, and friends. However, the greatest influence over us is the influence we have upon our own individual selves, in how we approach and understand ourselves , train ourselves and censure ourselves. This means we need to recognise our faults and our weaknesses as well as our virtues and strengths.

O Allah! Help us to see the weaknesses within ourselves and help us to overcome them. Do not leave us without Your assistance for a moment.