The Night of Power (Laylah al-Qadr)

In a short, often recited Surah of the Holy Qur'an there is a mention of a remarkable night called laylah al-qadr:

"We have indeed sent down (this Qur'an) in laylah al-qadr;
And what will explain to you what laylah al-qadr is?
Laylah al-qadr is better than a thousand months.
The angels and the spirit descend in it, by God's permission, on every errand. Peace! This until the rise of dawn." (97)

Qadr has two related meanings: power and destiny and is often the case in the Qur'an it is likely that both meanings are intended. Laylah al-qadr therefore means a night (laylah) when God asserts His power in a special way in order to move events in a direction that he has destined for them. The revelation of the Qur'an was the prime example of such a manifestation of divine power and will. 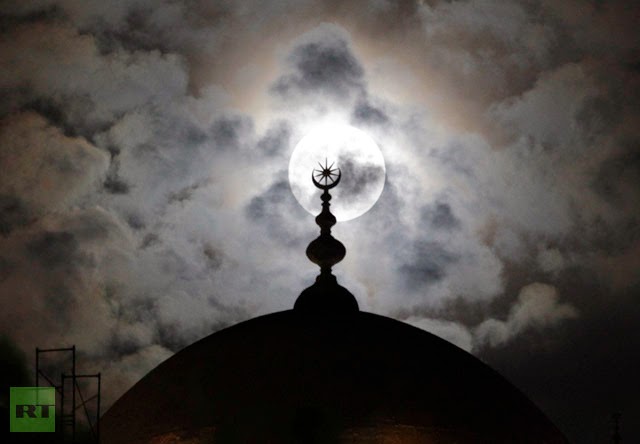 Laylah al-qadr is also mentioned in the first few verses of Surah 44, where it is called a blessed night (laylah mubarakah):

"We sent it down on a blessed night, for we were sure to warn; Every matter of wisdom is made distinct in it,
By command from Us, for We were bound to send (messages);
As a mercy from your Lord, for He hears and knows (all things)." (44:3-6)

1) The essence of the message revealed in the Qur'an was made clear to the Prophet on the first occasion of revelation. Later communications simply provided detailed expression of that message.

2) The beginning of a divine act is like the whole act, since, by virtue of its being a divine act, its completion can be taken for granted. Indeed, a divine act, even when it has not yet begun, can be considered as having already taken place, because nothing can prevent its happening. And, God does not live a time zone, He is beyond time. To Him anything that 'is to happen' is as if it has already happened.

"Angels and the spirit descend in it."

The Arabic word for descend is tanazzalu which implies repetition. If we go by Hadith, there are numerous traditions that show that the night of power comes again and again.

EXISTED BEFORE THE PROPHET MUHAMMAD

Since extraordinary manifestations of divine power have occurred among all nations and changed human destinies in all ages, we should expect that the night of power has existed throughout history. This is supported by a tradition in Nisai, in which a Companion asks the Prophet whether the night of power existed only during the lives of the prophets or did it also come after them and the Prophet replies that it also came after them. In this tradition it is taken for granted that the night of power existed during the lifetime of every prophet and the question only is whether it also existed after the departure of the prophet, which question is answered in the affirmative by the Prophet.

BETTER THAN A THOUSAND MONTHS

The night of power can make sense to, or benefit, those who believe in the Unseen (or ghayb), in a world beyond this world, in the existence of a part of reality that we cannot perceive or comprehend through our senses (with or without the aid of scientific instruments) or through logic and reason. Belief in the Unseen is a gift, for it enriches a person's life and gives it meaning provided it does not entangle him in all kinds of superstitions.

In terms of this analogy we can better understand the Qur'anic statement that "the night of power is better than a thousand months." just as the amount of water that can fall in a very heavy rain can be greater than the amount that falls in thousands of brief drizzles, so also the blessings that descend on this world on the night of power are greater than the blessings sent down in a thousand months.

For example, according to one tradition some Companions had a dream that the night of power was in the last seven nights of Ramadan. The Prophet confirmed the dream and said: "Whoever wants to search for (this night) should search in the last seven nights (of Ramadan)." Yet in another tradition the Prophet is reported to have said: "Look for the night of power when nine, seven or five nights remain in Ramadan (i.e. from 20th to 25th of Ramadan, inclusive)." But on the other hand, "search for it on the 29th, 27th and 25th" of Ramadan. All these traditions are from Bukhari. If to these we add traditions from other Hadith collections, the uncertainty increases. Traditions in these other collections fix the date of the night of power as the 1st, 17th, 21st, 23rd, 24th, 25th, 27th or the last date of Ramadan.

This uncertainty about the date of the night of power would be inexplicable if the night of power had a fixed date as the anniversary of the beginning of the Qur'anic revelation. The revelation of the Qur'an was a tremendous event which profoundly impressed the Prophet's mind. It is almost impossible that he forgot when and where this most important event in his life, and indeed in the whole history of mankind, started. Some of his early companions such as Khadijah, Abu Bakr and Ali must also have known about its date.

The truth of the matter seems to be that the night of power has no fixed date. In principle it may not even fall in the month of Ramadan, as is suggested by a saying attributed to Abdullah ibn Mas'ud: "Everyone who gets up for prayer every night of the year will hit upon the night of power."(1) It is also possible that in some years there is no night of power. It is like a heavy rain in the desert, which does not fall according to a fixed calendar. This whole world is a spiritual desert. God now and then showers it with abundance of spiritual blessings but not on fixed dates. Very important things do not have fixed dates. But Allah knows best.

Muslims of many different persuasions spend nights in Ramadan (e.g. the 27th) in prayer in the hope of encountering the night of power. This tradition is worth keeping even though the night of power has no fixed date. For one thing, a night of prayer in hope of God's mercy and showers of His blessings cannot but be good. For another, the chances of encountering the blessed night are perhaps higher on one of these traditional dates than on other nights (since things can sometimes happen if sufficiently many people start believing that they are likely to happen). Moreover, the tradition of spending some night(s) in prayer keeps alive in the Ummah the search for the night of power and what it stands for.

WHAT THE NIGHT OF POWER STANDS FOR

The night of power stands first of all for belief in the Unseen, its power and its continued relevance. The Qur'an says that the angels descend on the night of power. Since angels are the symbols of the powers of the Unseen , their descent on recurring nights of power means that the Unseen does still continue to interact with the human world.

The night of power also stands for knowledge and enlightenment. For the Qur'an also says that the ruh or the spirit is sent down on this night. In the Qur'an the ruh or the spirit (equated sometimes with the angel Gabriel) is a source of knowledge and life. Its descent on the night of power means that the coming of this night results in an unusual increase in knowledge and enlightenment in the world and in a corresponding enhancement of human life.

Finally, the night of power stands for salam and barakah, as the Qur'an says:

"Salam! This 'till the rise of dawn" and "We revealed it in a night of barakah."

Salam (peace) and barakah (blessings) include all that is good and make life wonderful.

The fact that the night of power comes again and again means that some doors of divine mercy will always remain open even though the prophetic revelation has come to a conclusion. Believers can, and do, still receive power, knowledge and enlightenment from the Unseen. The angels still come and help the believers. The spirit still descends to guide the believers and to inspire them to rise and declare the truth. This is a point on which those members of some religious groups should ponder who lead their religious lives as if the Seen has been cut off from the Unseen and the angels and the spirit have retired.